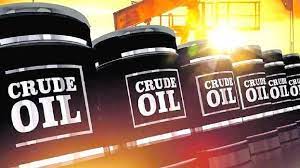 Crude prices edged up about 1% after dropping to a seven-month low in the prior session as some technical traders bought the dip and Russia threatened to halt oil and gas exports to some buyers.

Crude prices edged up about 1% on Thursday after dropping to a seven-month low in the prior session as some technical traders bought the dip and Russia threatened to halt oil and gas exports to some buyers.

“Most of that oil in that build came from the Strategic Petroleum Reserve. The quicker we empty out the SPR, the bigger the draws are going to be in the future,” said Phil Flynn, an analyst at Price Futures Group.

On Wednesday, both benchmarks dropped more than 5% to close at their lowest levels since mid-to-late January, putting WTI into technically oversold territory for the first time in a month.

“Today’s advance … appears motivated mainly by an oversold technical condition that allowed the complex to shrug off a seemingly bearish crude stock build per the EIA,” analysts at energy consulting firm Ritterbusch and Associates said.

The European Union proposed capping Russian gas prices, raising the risk of rationing this winter if Moscow carries out its threat. Russia’s Gazprom has already halted flows from the Nord Stream 1 gas pipeline.

Concerns about the health of the global economy and expectations of falling fuel demand led to sharp oil price falls in the previous session.

China’s Chengdu extended a lockdown for a majority of its more than 21 million residents to prevent further transmission of COVID-19.

The European Central Bank (ECB) raised its key interest rates by an unprecedented 75 basis points and signalled further hikes, prioritising the fight against inflation even as the bloc’s economy is heading for a likely winter recession.

U.S. Federal Reserve Chairman Jerome Powell said the central bank is “strongly committed” to bringing down inflation and needs to keep going until it gets the job done.