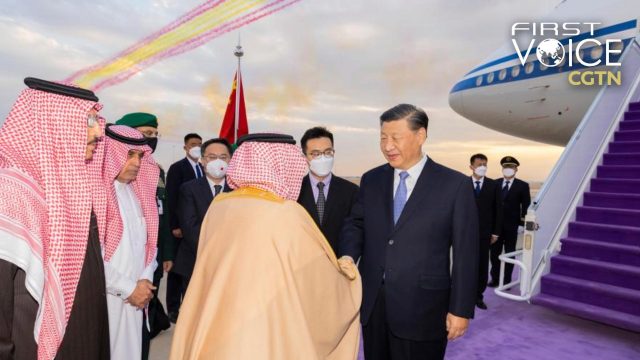 Upon receiving a grand welcome a day before, Chinese President Xi Jinping met with Saudi King Salman bin Abdulaziz Al Saud and Crown Prince and Prime Minister Mohammed bin Salman Al Saud on December 8. The state visit to Saudi Arabia is part of his four-day trip to the country where he will also be attending the first China-Arab States Summit and the China-Gulf Cooperation Council Summit.

According to Saudi Press Agency, this visit is “to bolster historic ties and strategic partnership between the two countries.” Chinese Foreign Ministry Spokesperson Mao Ning described it as the largest and highest-level diplomatic event between China and the Arab world since the founding of the People’s Republic of China. It is an epoch-making milestone in the history of China-Arab relations.

In April, Chinese President Xi Jinping told Crown Prince Mohammed bin Salman Al Saud that China gives priority to developing relations with Saudi Arabia and stands ready to work with the country to continuously deepen their comprehensive strategic partnership and to bring more benefits to the two countries and their people.

That prioritization was on full display on December 8. Chinese President Xi Jinping said during the meeting that Saudi Arabia is an important independent force in the multipolar world. China supports Saudi Arabia to walk a developmental path that fits its own national conditions, and that China supports Saudi’s 2030 Vision and the Green Middle East Initiative. Xi expressed that the two countries should ensure fully synergize Belt and Road Initiative and the 2030 Vision, the two signature initiatives of these two countries.
As Xi wrote in the signed article published by Saudi newspaper AI Riyadh, China and Arab states have relationships that date back to more than 2,000 years. The Silk Road on land and Spice Road on the seas witnessed these interactions that spanned across the Asian continent.

China and Saudi Arabia have enjoyed a flourishing relationship since establishing diplomatic relations in 1990. During the early years, bilateral trade was worth less than $500 million. Today, China is Saudi Arabia’s largest trading partner. As of 2021, the bilateral trade volume surpassed $87.3 billion, increasing by 30.1 percent year on year. Among all of China’s nearly $214 billion investment in the Arab world, Saudi Arabia is the destination for more than one-fifth of it. And Saudi Arabia has become China’s largest oil supplier, accounting for 17 percent of China’s oil imports.

When the Yanbu Aramco Sinopec Refining Company was put into operation in January 2016, it became Sinopec’s first overseas refining and chemical project and also was China’s largest investment project in Saudi Arabia. The China Railway Construction was responsible for constructing the Mecca Light rail, the first light rail in Saudi Arabia. According to the research firm Green Finance and Development Center, Saudi Arabia was the largest recipient of Belt and Road Initiative’s investments in the first half of 2022, with a total of about $5.5 billion. As Saudi Arabia seeks to achieve its Vision 2030, “looking east” has become the trend for the nation’s development.

Building on the progress already made, Xi expressed China’s support for Saudi Arabia to become a dialogue partner at the Shanghai Cooperation Organization. With the groundbreaking China-Arab States Summit and the China-Gulf Cooperation Council Summit, China hopes to work with Saudi Arabia and other Arab countries to advance China’s relationships with the region. Crown Prince Mohammed bin Salman Al Saud also expressed Saudi’s hope to strengthen and elevate the comprehensive strategic partnership with China and believe that Xi’s visit will be a milestone in China-Saudi Arabia relationship.

Always keeping an eye on the big picture is the secret behind any success, especially in international relations where all kinds of variables could pop up at any time, threatening the stability of relationships. Unlike those who weaponize economic ties in exchange for geopolitical compliance, the relationship between China and Saudi Arabia is one that is rooted in the hope for common prosperity – a prosperity that allows differences to be managed and common interests be pursued. China-Saudi Arabia relationship is built on a pragmatic approach to achieve mutual development.

As President Xi remarked at the Arab League Headquarters in 2016, turmoil in the Middle East stems from the lack of development, and the ultimate solution will depend on development, which bears on everyone’s well-being and dignity. Such a developmental philosophy is extracted and built upon the decades of Chinese experience, which can also be shared with Saudi Arabia and other Arab countries.

Meanwhile, China and Arab countries like Saudi Arabia share the same goals and directions in transforming their respect economies. Saudi Arabia can’t be overly dependent on oil as the world undergoes an energy transition. So Saudi Arabia is trying to achieve diversification of its economy through its own kind of industrialization. And on the matter of industrialization, China has more contemporary experience to share than almost any other country.

Working towards common objectives under a shared philosophy drives China-Saudi Arabia relationship forward. And with China’s relationship with the region grows, a clear-eyed focus on the big picture by all parties would bring the stability and prosperity that we all desire.

(If you want to contribute and have specific expertise, please contact us at [email protected] Follow @thouse_opinions on Twitter to discover the latest commentaries in the CGTN Opinion Section.) 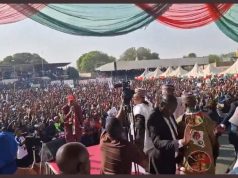 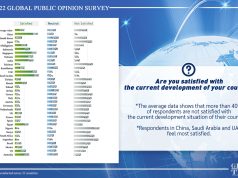 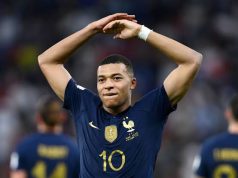